PrevPrevious PostHealth Care is a Commodity in the US; How We change that
Next PostLong Term Care Coverage Matters: Quality Gaps in Nursing HomesNext

By Margaret Flowers for Popular Resistance. Above photo: Colleen Flanagan of Boston, center, and others in wheelchairs with a group called ADAPT, rally prior to a hearing by the Senate Finance Committee on the Graham-Cassidy health care repeal, on Capitol Hill in Washington, Monday, Sept. 25, 2017.  J. Scott Applewhite.

Washington, DC – With the September 30 deadline for the budget reconciliation process looming, Senate Republicans attempted once again to repeal and replace the Affordable Care Act (ACA).

Senators Lindsay Graham of South Carolina and Dr. Bill Cassidy of Louisiana submitted legislation last week that would end the Medicaid expansion, cut federal funds for Medicaid and allow states to decide that insurers could deny coverage for pre-existing conditions. States would also no longer have to require that insurers cover essential benefits, as defined in the ACA.

The bill seemed dead by the end of last week when Senator John McCain announced that he would vote against it. But Senators Graham and Cassidy went into high gear over the weekend to add extra funding for states like Alaska, Maine and Arizona to encourage their support. Activists throughout the country also geared up to fight back.

By early Monday morning, hundreds of people, including many disability rights activists filled the halls outside the Senate Finance Committee room to protest a hearing on the bill scheduled by Graham and Cassidy.

Reporter Jeff Stein took video of the line at 7 am. The hearing was scheduled for 2 pm.

The Graham-Cassidy hearing is the hottest ticket in town, in one video: pic.twitter.com/y4prO1DA5C

If health care defenders had their way, that hearing would not even take place. As the line grew, police formed a human chain around the attendees.

About to go into the Graham Cassidy hearing room with other #ADAPTandRESIST folk! pic.twitter.com/DhxlbTrAgN — Gregg Beratan (@GreggBeratan) September 25, 2017

And as the hearing started, the few who were admitted began to disrupt.

Arrests beginning. Worth stressing how many more were willing to be arrested but couldn’t get in room pic.twitter.com/MGg6eT5ls9

“Protesters in wheelchairs interrupted Tuesday’s hearing on the GOP’s health care bill — loudly screaming, “No cuts to Medicaid! Save our liberty!” The noisy protests forced Finance Committee Chairman Orrin Hatch to recess the hearing just moments after it began. Hatch told the protesters, “If you want a hearing you better shut up!” His complaint was to no avail as the protests continued. So Hatch then shut the hearing down, saying it would resume when order was restored. The protesters were removed from the hearing room one by one.”

By the end of the afternoon, almost 200 people were arrested. ABC News reported:

“Capitol Police officers struggled to remove people, with some sliding out of their wheelchairs and onto the floor. Eva Malecki, a spokesperson for Capitol Police, said in a statement 181 protesters were arrested Monday afternoon. ‘Fifteen demonstrators were arrested and charged with disruption of Congress,’ Malecki said, adding, ‘143 individuals were arrested after refusing to cease and desist with their unlawful demonstration activities in the hallway. Twenty-three individuals were charged with crowding, obstructing, or incommoding and resisting arrest.'”

Protests against the bill took place elsewhere around the country. In Columbia, South Carolina, dozens of ‘zombie brides’ visited Senator Graham’s office to oppose the bill. 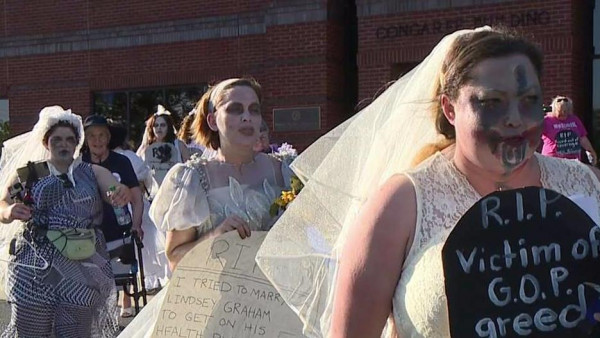 And protesters rallied this morning in Ohio to send Senator Rob Portman a message to oppose the bill.

All in all, it is clear that people in the United States will not tolerate changes that drive millions of more people off of health insurance. And with support for National Improved Medicare for All growing, it is time to turn that energy towards making a universal publicly-financed high quality and comprehensive healthcare system a reality in our nation.