Patients Protest MedStar for Terminating Their Doctor Without Cause

PrevPrevious PostMedStar is a Non-Profit with For-Profit Policies; Closes Critical Programs
Next PostLouisiana to warn thousands of elderly, disabled they may lose MedicaidNext

A spirited protest action was held at MedStar’s Union Memorial Hospital on Thursday morning, May 10, 2018. The hospital is located at 3333 N. Calvert Street, at 33rd Street & University Parkway, in Baltimore.

About 40 activists showed up for the rally/press conference, which was sourced by the Maryland branch of “Health Care is a Human Right” (HCHR)” campaign. MedStar was the target of the protest action. 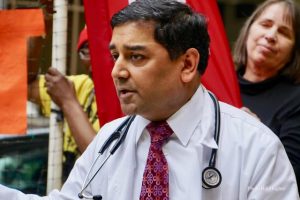 The protesters charged that the institution had recently arbitrarily dropped Dr. Shawn Dhillon, a primary care doctor at Union Memorial for 20 years.” This action was supposedly done without cause by cutting him from “MedStar’s insurance plans.” This also had the effect of terminating half of the patients in his practice. It was reported MedStar “pressured him to leave.”

The protesters further alleged that roughly “400 Medicaid patients in Dr. Dhillon’s care were gotten rid of by assigning them to an inner-city clinic unaffiliated with Union Memorial.” MedStar’s conduct in this situation, the activists charged was similar to the discriminatory action at Franklin Square Medical Center where allegedly “critical services were closed without warning.”

One of Dr. Dhillon’s patients, the Rev. Annie Chambers, spoke at the rally. She claimed: “Our basic rights as patients are being violated and access to our doctor is being taken away…We are not going to be silent about this.”

Another patient, Ian Schlackman, said: “Patients are being used as pawns in MedStar’s strategy of putting profits ahead of the needs of patients and the health services needed for communities.” Donna Simone Plamondon of Hampden is another of Dr. Dhillon’s patients. She couldn’t make it to the rally but wrote: He’s been my primary care physician for over 15 years. MedStar said the office was closing on Sept. 1st, 2018, and that he was retiring. It prevented us from contacting him in any way. I’m pissed!”

Maryland Healthcare Is a Human Right Campaign was the sponsor of today’s action. Margaret Flowers, MD, one of its co-founders, ripped MedStar for using “the community as a profit center to make their executives and investors wealthy. Health care is a human right, not a commodity,” she added.

MedStar denies all of the activists’ claims. It said its priority “is to provide quality care to all patients, and, as such, has properly informed patients of other providers in their network.” MedStar further said the dispute regarding Dr. Dhillon and the hospital was really a matter between that physician and the “insurance division of MedStar.”

While the rally was proceeding, Dr. Dhillon took a few minutes off from seeing patients inside the hospital to made an appearance. He thanked everyone for their support. He warned that on the ongoing important issue of health care “peoples’ voices aren’t being heard.” Dr. Dhillon regretted the fact that because of MedStar’s arbitrary actions, he would soon be leaving the hospital after twenty years of faithful service.

To follow up on this issue, go to http://www.stopmedstardiscrimination.org